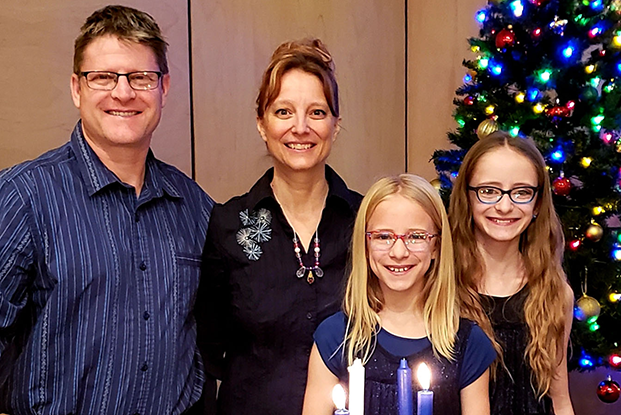 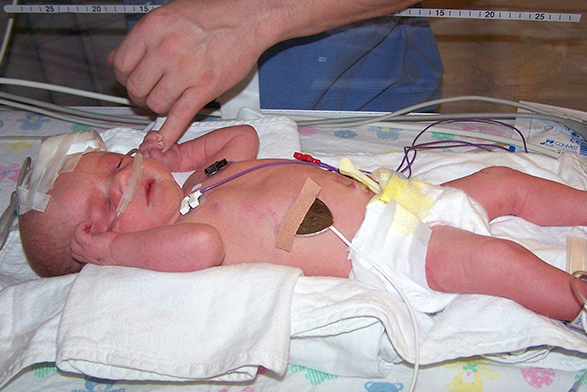 We live on a farm just south of Moose Jaw. At 11 pm on September 9, 2007 my water broke. Our baby wasn’t due until the middle of October, so this was a complete surprise. I called my Mom, a retired nurse, to ask how long after your water breaks do you have the baby? She said typically one-two days. I was secretly hoping she’d say two to three weeks. But just 1 hour and 44 minutes later Kaylee was born weighing just 4 pounds 11 ounces.

Because she was a preemie and her lungs weren’t fully developed yet, a neonatal ambulance was called to take us to Regina. Kaylee was struggling to breathe, and she was immediately put on a respirator. Both my husband and I were left behind. The thought of her being on her own when she was just a few hours old was devastating.

We were in shock and sleep deprived and didn’t really comprehend all that was happening. Thankfully my aunt is a nurse at the hospital in Regina. She stayed with Kaylee in the NICU until we arrived. By then she was off the respirator. In my heart I knew she was going to make it, but she was just so very little.

Two years later Abriella was born weighing 5 lbs 1 oz and four weeks early. This time I was monitored closely during my pregnancy. Just like her big sister, Abby was immediately transferred to Regina in the neonatal ambulance. She was really struggling to breathe but this time I knew the routine in the NICU, which was oddly comforting.

It was the time of the H1N1 scare and no children were allowed on the Mother/Baby ward. So, there I was in Regina with Abby and Kaylee wasn’t allowed to visit either of us. It was heartbreaking.

I was discharged Christmas morning and went home to spend time with Kaylee, but our hearts were with Abby who was in Regina all by herself. She was discharged on Boxing Day. Every Christmas since, we’ve been together as a family.

Today our girls are happy, healthy, smart and hardworking 12 and 10 year olds with hearts of gold. They’re active in our local curling community, their school and church.

I was Director of Bar Services at the 2015 Scotties in Moose Jaw. We’re very proud that Kaylee and Abby have been chosen as Future Stars for the 2020 Scotties.

Both girls started curling when they were 7 years old. They play competitively and have amassed quite the collection of bronze, silver and gold medals.

I thought you might like to meet two extraordinary girls and young curlers that have benefited from the life-saving equipment that the Sandra Schmirler Foundation has helped fund here in Saskatchewan and right across Canada.

I remember watching a commercial when Kaylee was a newborn that said: “Champions Start Small” and then a tiny fist was raised in a little isolette. I would raise Kaylee’s little hand whenever I saw it and say, “you are one of those champions”.

I truly believe that NICUs across Canada provide the most advanced, quality care a preemie can receive and in a large part this is thanks to the Sandra Schmirler Foundation and the incredible donors, people like you across Canada, that come together to help save vulnerable babies’ lives.

Your donations offer peace of mind and strength for new parents who are both shocked and terrified by circumstances they never imagined or planned for.